Summary of the case: 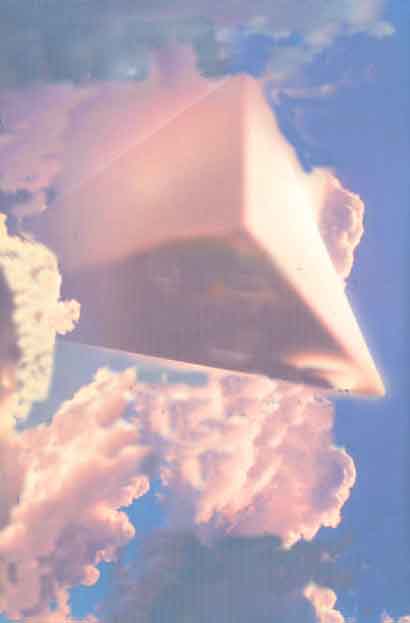 picture of their ships  of pyramide-shape

"The true story of a man taken for ten days to an extraterrestrial civilization".

"They did describe basically what time travel is all about and they were very succinct in describing too me that there is no physical matter in the universe that is solid. Everything is constructed with wave and vibration resonance patterns (this includes man at a quantum level TT). The more deep the resonance pattern the more solid the object. And the same is true for time, time is just a frequency wave."

radio-interview ten years after this happend in mp3  |  new interview on aftertime from oct.2015 - alt.

Alec Newald is not one to step into the lime light with his story. Genuine contacts of ETI like to keep their heads down and his story is one that readers of Nexus Magazine will have heard of. The triangle craft from the ETI of Haven as they call it are also known to be time travellers. Alec was abducted for ten days, and was asked to help the authorities to which he declined it seemed that these powerful scientists are fully aware of them.

In fact from experience we can tell that this group in particular have experimented with time and the results have been disastrous.

To the point where it has effected their whole planet. It is true also from experience and indicated by them that their dimension has no life in it at all. It is a strange sight. They are caught between two dimensions.

As Alec says we are in dimension 3 and they are in dimension 3.5. Alone in some ways as a race and the victims of their own quest for power. They have learnt the hard lesson. One hopes this does not befall the human race. The nearest one gets to seeing what they look like is from a photo doing the rounds at this time of a dead ETI aboard a naval ship. I suspect it is a female and her suit has been removed. But I found the photo disturbing. As it is close to the mark.

They are one of the ETI groups who have time technology woven into their civilization similar to the way we have computers in ours. They also have mind power that is highly psychic. Along the path of my experiences I was bumping into them continually and never knew. These are the one's who shocked me by entering my room I will never forget them speaking and thundering off into the sunset. They are the one group that appears to have communication with another group known to be at a high stage of technological evolution in terms of time manipulation. I have seen them clock the speed of the other groups craft as they came which fascinated me. That is another story.

In 1989 Alec disappeared for ten days and returned dazed and confused. While driving through a foggy mountain pass, this was on a Monday, and he returned on a Thursday, ten days later with no idea where he had been the back cover states.

"What he learned and experienced during his stay with friendly beings has profound implications for all of us here on earth".

Of course Alec then received knocks at the door from Scientists who appeared to know all about these aliens, and who they were. "They were keen to learn what he had noticed about this alien race".

His stubborn streak and spirit of free will landed him in trouble as he refused to co-operate.

"It as obvious that these "scientists" knew all about Alec’s abductors and expected they would return to Earth one day - soon."

As he states, and I concur on page 175 of his book he tells the reader

"I have reason to believe that within the next few years of our lives here on this planet there will be open contact with extraterrestrial beings !. It has been suggested too me that this will take place well within my own life time upon this planet."

"It is expected that a group of extraterrestrial beings of many different races will openly approach a selected group of humans, comprising civilian as well as military personnel. This human group will have been contacted prior to meeting, initially by subliminal message, then, as the time approaches for open contact, via telepathy in order for more details to be passed on. It has been suggested by me that contact, could take place simultaneously in several locations around the world. I've have been told that children will be involved perhaps theirs as well as ours ." Alec Newald

It is known that Alec had entered a breeding programme with a female ET called Zeena he was free to leave at anytime and was not forced.

Alec discussed with Zeena the various aspects of their culture and at no time was he forced to do anything against his will. There were also the Elders of the race and Alec reckoned they had enough mind power to stop a tank. The vehicles they drove were propelled by the mind, and it is known that in the history of their evolution they made an attempt to dimension jump, and are trapped between two dimensions, if ours is the third, they were stuck on dimension 3.5.

The symbol of their planet is a half completed triangle, which is a symbol of the journey of their incompletion. The idea was to come back to our dimension and when our race reaches its stage of evolution they would then move with us to the fourth. They were baffled when they spoke to Alec as to how we treat our world especially cars they could not understand how we let such instruments cause such damage. And were fully aware of the forces which have committed the human race to mass genocide on a number of occasions.

Their opinion of this force was that it was trying to find expression within the framework of the Universal Mind and that this force that generated such fear and hatred would move on as we evolved. The biggest joke of all, and one I agree with, was the stupid idea that this force could be controlled and gave the illusion it could be. Alec discovered upon his return that he did not require much sleep and that he also got a knock at the door from our fellow human beings who wished to know of their capabilities and wished to debrief him. Of which he declined to help them. This resulted in him being fitted up, and placed in prison for six months on a charge of trading in stolen cars. He continued on, and wrote the book Co-evolution, which is available from Nexus magazine.

Zeena indicated to him that she was a hybrid, and possessed high intelligence, she was though becoming baffled by the emotional responses she was dealing with towards a male. Even the Elders became baffled, as she gave off feelings that they could not understand. Alec indicated this came as a shock seeing highly advanced beings looking at him for help, in how to deal with human relationships.

It was noted that on a number of times various ETI groups have tried to contact us and failed. However on this occasion they have hit the mark as man begins to understand his heritage. Our race is going through monumental evolutionary changes at this time and many ETI groups are watching with interest. One of the male ET’s Jarze commented on our exploration for life outside the universe to Alec.

"Out of this discussion came the topic of other life in the universe and how our search for it from earth has not yet produced any real evidence apart from the occasional UFO. Jarze was quick to ask if we had looked for it in realms other than the physical. "We have used radio telescopes, I believe." Was my reply. "Good idea," Jarze replied, "But not very many other life forms, use that form of communication. It would be best for you to use what we have used in the past, and that is the device which is activated by the intelligence levels emitted from various planetary systems.

"How can you do that?". I asked. "On board the transporter I was told that all things, even the energy known to us as atoms, contain a certain level of intelligence." "Correct", replied Jarze, "But conscious intelligence such as you emits far higher readings than non conscious forms- to the order of many of your Earth numbers, if you understand me; perhaps ten-thousandfold as much emission would be a conservative number, I think. This form of detection has other advantages, too. For instance, life forms that you may not physically see can still be detected in this way."

"Since the dawn of your race's time on Earth, we and others like us have been trying to contact you in this way, but you keep trying to make it into some kind of religious experience. We have been passing on ideas to help you evolve for aeons of your time, but very little is ever taken on board by your kind. Still, we try," Jarze concluded.

Alec comments that ETI uses telepathy to communicate and also very powerful imagery. You can by his book from Nexus Magazine which is packed with information that might be of benefit to the greater good. The video is also very interesting. pyramid ufo over Russia | +this

radio-interview ten years after this happend in mp3 | alt.

radio-interview ten years after this happend in mp3