UFO landing on NATO atombase in

One of the most important close encounters ever reported by the military, with documentation obtained through the Freedom of Information Act, is the multiple-witness events which occurred at a joint British/American NATO air base in England. The release to American researchers of the memorandum detailing the eye witness account of Lt. Col. Charles E. Halt (later promoted to Colonel), deputy commander of the base, gave tremendous credence to the investigative reports done at the time of the incident. It is important to note this Halt memorandum states that the initial event occurred "Early on the morning of 27 Dec 80 (approximately 0300L)." In September, 1994, one of the security men present at the encounter, Staff Sargent James Penniston underwent voluntary hypnosis about the event. He stated that though during hypnosis by government agents a few days after the event, he was told that the stories from the witnesses would be the same, but would have different dates. This may explain why the dates in different reports are confusing. It is generally accepted that the initial event occurred early in the morning hours of December 26, 1980.

RAF/USAF Woodbridge is located eight miles east of Ipswich, Suffolk in England, and is one-half of the twin bases whose other half is the RAF Bentwaters NATO Air Base. All of the main buildings and quarters were at Bentwaters, although Woodbridge had its own runway. During World War II, the twin bases served as a maintenance unit for front line forces in Germany. Hercules transports and huge helicopters were based here. It was entirely a US base, manned almost exclusively with US personnel, with only a token Brit in residence who was given the rank of squadron leader. The large and dense Rendlesham Forest surrounds the bases.

Over two nights on the Christmas holiday weekend in 1980, astonishing close encounters occurred on the twin air bases of Bentwaters and Woodbridge. Preceded by a visit outside the forest to a nearby residence, a UFO landed in the forest on the Bentwaters Air Force Base around 2:30 am on December 26, 1980. It was witnessed first by two soldiers on patrol. 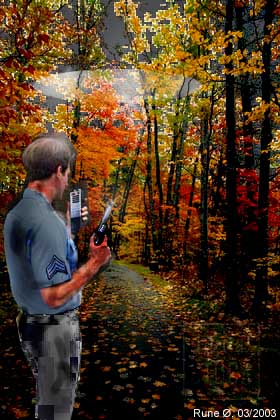 The men first thought they were seeing a beam from a lighthouse and then guessed it could be "light-balls" — large, portable bright lights which effectively turned night to day to provide visibility for nighttime maneuvers. As they watched, the hovering light descended below treetop level. The soldiers thought perhaps a plane had just crashed on the Bentwaters runway. The men radioed to headquarters.

Three relief guards were sent out, and this first pair missed the rest of the encounter. Two of the relief guards went by jeep and then by foot through the forest in pursuit of the UFO. The men described it as somewhat triangular in shape and possessed blue, white and red lights around the perimeter of the bright white body of the craft. When the soldiers came within sight of the UFO, it was hovering just above the ground, or resting on landing gear on the ground. It lifted up and drifted slowly when one of the soldiers got very near, then shot straight up at a dizzying speed while casting a bright light onto the forest, causing cattle to panic.

The two soldiers were dazed by the event. A search party found them almost an hour later, still disoriented. British police were called in; airport radar controllers were contacted. Heathrow reported a target on radar that disappeared in the Bentwaters vicinity, and reports of bright lights in the sky had come in at various times from all around southern England. It was confirmed that no air traffic was above Rendlesham at the time of the incident.

Near midnight on the 26th, a four-man team set out to investigate the area in Rendlesham Forest where the UFO had come to rest the night before. Soon they observed a highly unusual curtain of light with mist or fog below it. As the soldiers got closer, they could see a structured object, described to be of indeterminate shape but with yellow, red and blue lights on it. The multi-colored object backed away while a high level of static electricity saturated the atmosphere, causing hair to stand on end. The soldiers radioed to Lt. Col. Halt, the deputy commander at Bentwaters, who told them to stay put, that he would bring reinforcements and join them.

Lt. Col. Halt and approximately thirty soldiers arrived who began to erect light-alls, which initially failed to function. Halt dictated notes into a portable tape recorder, registering radiation readings that increased in the area where the UFO had landed the previous night and left three imprints in a triangular shape in the soil, and detectable heat signatures on the surrounding trees, which were visible through a starlight scope.

Shortly before 2:00 a.m., Col. Halt and the soldiers saw a single yellow-red light on the ground, which caused the animals on the adjacent farm to become agitated. Suddenly, the lighted object rose and glided in the air towards them, issuing from itself a stream of multi-colored lights. Other military men saw the light merge into the foggy essence on the ground and implode within it. There was a tremendous flash of light and the fog transformed into a solid, domed disc with a fluorescent glow to it, rimmed with blue light. The area of blue light on the craft showered out sparkling colored bits that fell onto the ground. Allegedly, two separate military men took photographs of this object. The craft lifted and began to produce more spectacular light displays around its rim. It hovered and bobbled in the air in front of the soldiers. As the UFO moved away, up to five separate lighted objects were observed.

The men watched the objects move out over Woodbridge and towards the sea where they put on a lengthy display, sometimes appearing as half-moons and sometimes as full circles, always sparkling with colored light. However, the encounter was to become close once more. One of the UFOs raced above the forest toward them, sending down beams of light. Two soldiers on a separate detail reported an amorphous structure of light weaving through the trees that sent light beams straight through tree trunks then seemed to explode above them like a dying star. The night’s incredible events had spanned more than four hours.

The first eyewitness was a resident on the other side of Rendlesham Forest in Sudbourne named Gordon Levett. Levett was outside preparing to put his dog away for the night. A huge mushroom-shaped bright object drifted in from the sea and hovered silently in the sky above Levett and his large guard dog, who began trembling and remained shaken by the event throughout the following day. During an interview with British UFO researcher Jenny Randles, Levett recalled:

The second night’s events were witnessed independently by other non-military citizens who had sightings off the premises of the base. Arthur Smekle saw a mass of lights in the sky above Rendlesham Forest about 11:00 pm while driving home through the forest. He mentioned it when he got home but was reminded that it since he was adjacent to the air base, it was probably just an aircraft. The Webb family all saw a huge white mass of lights in the sky at 2:30 am (now 27 December) while driving home to Martlesham. They stopped the car by the side of the road and watched it hover silently, then shoot off through the sky at extreme speed. Several farmers in the area also were interviewed or submitted reports to the British investigators. One of the farmers had even called into the base and reported bright lights in the sky just before the UFO came into the Bentwaters compound.

Forest Ranger James Brownlea found physical traces of the landing in the forest the following month. While the official government memo by Col. Halt was not released for another two and one-half years, Brownlea’s January 1981 report describing finding a hole in the tree canopy, scorched trees and unusual marks on the ground coincide with what Lt. Halt officially reported to the British Ministry of Defense and the United States Air Force.

Col. Halt’s report details the events of the second night’s encounters as follows:

As of the writing of this book in 1997, Col. Halt is a still-living military commander who witnessed one of the most remarkable, documented UFO encounters in military history. This event continues to be the subject of further research. For example, a recent book by Georgina Bruni is entirely devoted to the Bentwaters incident and cites a far more comprehensive list of witnesses than has been described by earlier writers.