Billy is writing a book. They think he is going too fast but they want him to make the decisions....and she tells of:

Our current history thinks it was 10,079 years ago, but it was 1,000 years before that. It was caused by a large comet the Pleiadians call the Destroyer comet (ca 1.72x mass /size of earth). The rotation of Earth changed from over 40 hour days to the current 24 hour day. The sun did not rise in the East then. The Comet will come again in 2255. Its last passage was in 1680 - 295 years ago. It normally comes in cycles every 575 and one half years.

· Last great catastrophe was 3453 years ago when it pulled the planet Venus close to Earth.

picture made of Rune Ø in-78 in oil - 1,1m width - when I first red "Worlds in collision" of Velikovsky but it was later that I found Semjase explaining the cause behind it.

· The trailing planet passes Earth within 600,000 kilometers and gets captured by the sun. It's heated up and moves into orbit between Mercury and Earth as "Venus". More 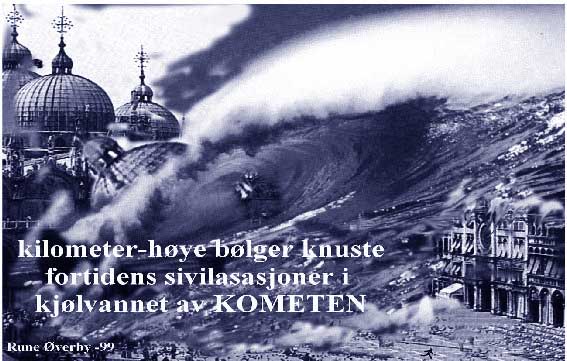 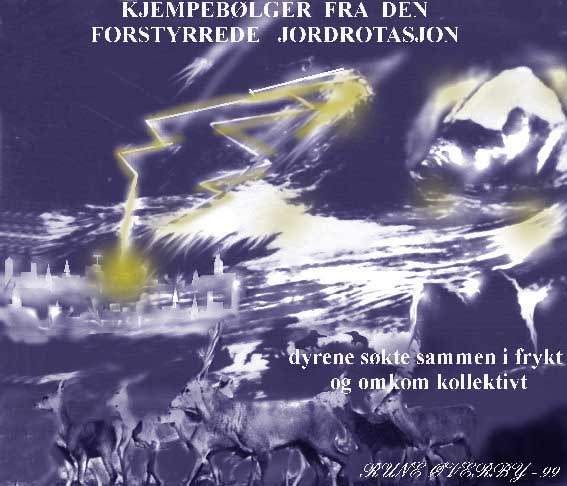 · The Comet also brought us our moon. The moon comes from a planet 4.5 million years older than Earth. Millions of years ago a sun went Nova (exploded) and pulled into itself and throwing/ pushing the surrounding planets and debris out into space. The sun collapsed into herself tearing a hole in space. Original size of that sun of 11 million kilometers - was now 4.2 kilometers. 1 cubic centimeter weighs several thousand tons.

· One of the fragments that was to be the "destroyer" was blown/thrown away, as a dark star, that travels for millions of years and comes into the orbit of another system. After many years the dark star slowly moved in closer to the big sun causing great storms and loss of life on a developing planet in that sun-systems 6th planet. Passes by the fifth planet causing some damage(in that same system). Moves close to the 4th planet and caused it to explode. One big part of the planet is flung out into space and is hit by meteors, etc. for a very long time and is rounded and grinded off as it fellow the destroyer

Comes after long time into our sunsystem where the second planet - then Earth- has beginning life. Comes into orbit around the second planet, Earth, and is now called the moon.(it is to remark that our earth back then WAS the 2.planet - the big destroyer-comet later exchanged the orbits of the planets.)

The "Destroyer" is still out there somewhere with a long tail of small particles. In ancient times the Destroyer also menaced our ancestors causing years of domination and cruelty. It is the legends of the destroyer that is behind the the talk of Nibiru/12th planet.

In ancient Lyrian history they speak of a Destroyer comet that came through their system and wiped out a large percentage of the population. This was a great setback to their civilization. That same comet led the Pleiadians into our system around 210,000 years ago ast they fellowed its orbit over "here". On several occasions, the comet had a dramatic effect on our planet. At 10,215 years ago, Earth was disturbed by that planetoide of immense size which parted the waters of the Atlantic ocean in the area where Atlantis had been. 10,079 years ago the Great Flood was caused by the comet. At that time, the Earth day was 40 hours long and the sun did not set in the East. This comet returns every 575 and one half years and will return again in 2255. The last passage was in year 1680 which caused some damage in the Mediterranean area. There were great storms and volcanic activity from the santorini volcano. Egypt was flooded. (more in the Velikovsky-material- link on videos on his ideas or window here just below:)

our ancestors from LYRA

In ancient times the Destroyer also menaced our ancestors.

There were years of domination and cruelty by the Lyrian leaders.

The leaders were very developed, and portrayed themselves to be Gods of man. They were called Kings of Wisdom, by the word IHWH, which on Earth means GOD.

500 years of wars broke out between the leaders and the public for freedom.

Years of wars, Earth became a colony of deported warriors.

· A large culture grows up, and then is destroyed.

· On the home planet Erra in the Pleiades, a war breaks out again. 70,000 people flee under rule of Pelegon, a IHWH (god)

· War calms down on the home planets and remained peaceful ever since.

The leaders were very developed, and portrayed themselves to be Gods of man. They were called Kings of Wisdom, by the word IHWH, which on Earth means GOD. After 500 years of wars between themselves there was a great exodus for freedom. A leader named Asael leaves with 183 great spacers - 250 explorer ships and 360,000 people. They travel throughout space and finally settle on one planet - then two more.

After a time they started exploring in space again. Found debris from old Lyra and discovered Earth. Colonies were created on Earth and Milona. After years of wars, Earth became a colony of deported warriors. A large culture grows up, and then is destroyed.

On the home planet in Lyra a war breaks out again. 70,000 people flee under rule of Pelegon, a IHWH (god) and settle on Earth building a civilization which last for 10,000 years and ends around 40,000 years back.

The Chronology of Earth History from this (and some later-) contact

This chart shows important moments in Earth history based on information from the Pleiadians. Dates are only estimates to show the chronology of events.

The Ancient forefathers of the Pleiadians ranged from only 50 centimeters tall - up to 12 meters. Some were called giants or Titans.

· The Darwin theory is wrong - we did not come from the monkey, the monkey came from experiments on humans. Some mutations like Africanus, Peking-human, Neanderthal etc. Most life on this planet comes from Lyra. Lyrians mixed themselves with local Earthpeople. Evas means "the bearer".