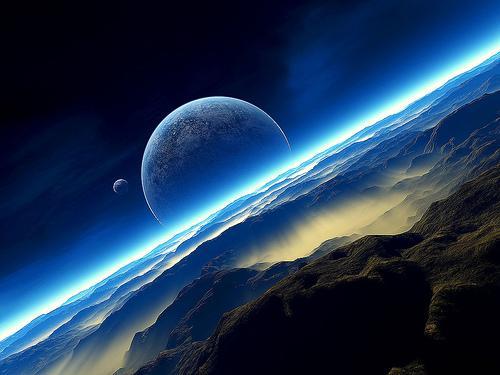 The National Academy of Sciences has issued a report documenting a swift and devastating climate change suffered in Peru 3,600 years ago. The report is exhaustive, covering the collapse of the Supe civilization, earthquake damage, and flooding.

Natural Disasters Doomed Early Civilization
January 19, 2009
http://m.apnews.com/ap/db_7731/contentdetail.htm?contentguid=fJCoiaSe
Nature turned against one of America's early civilizations 3,600 years ago, when researchers say earthquakes and floods, followed by blowing sand, drove away residents of an area that is now in Peru. Moseley and colleagues were studying civilization of the Supe Valley along the Peruvian coast, which was established up to 5,800 years ago. The people thrived on land adjacent to productive bays and estuaries, the researchers report in Proceedings of the National Academy of Sciences. The Supe fished with nets, irrigated fruit orchards and grew cotton and a variety of vegetables. They also built stone pyramids thousands of years before the better known Mayans. But the Supe disappeared about 3,600 years ago. A massive earthquake, or series of quakes, struck the seismically active region, collapsing walls and floors and launching landslides from barren mountain ranges surrounding the valley. In addition, layers of silt indicate massive flooding followed. Then came El Nino, a periodic change in the winds and currents in the Pacific Ocean, which brought heavy rains that damaged irrigation systems and washed debris into the streams and down to the ocean, where the sand and silt settled into a large ridge, sealing off the previously rich coastal bays. In the end, land where the Supe had lived for centuries became uninhabitable and their society collapsed.

This is only the latest in scientific and geological evidence of a pole shift 3,600 years ago, during the time of the Jewish Exodus. Emanuel Velikovsky's studies on what is written in the geology of the Earth likewise found that a great cataclysm occurred approximately 3,600 years ago. In his book Earth in Upheaval, he documented many of these scientific findings. Among them were changes in rivers and lakes of the N American continent.

Earth in Upheaval by Emanuel Velikovsky
Times and Dates, pages 202-203
Careful investigation by W.A. Johnston of the Niagara River bed disclosed that the present channel was cut by the falls less than 4,000 years ago. And equally careful investigation of the Bear River delta by Hanson showed that the age of this delta was 3,600 years. The study by Claude Jones of the lakes of the Great Basin showed that these lakes, remnants of larger glacial lakes, have existed only about 3,500 years. Gales obtained the same result on Owen Lake in California and also Van Winkle on Abert and Summer lakes in Oregon.

Scientific studies have consistently shown that the oceans of the world dropped 16-20 feet, worldwide, approximately 3,600 years ago. Since this much water would not simply disappear or evaporate suddenly, the cause must be some geological change. Perhaps the ocean rifts widened and deepened. Perhaps some land mass rose from the sea. The cause is unknown, but the fact is well documented.

Earth in Upheaval by Emanuel Velikovsky
Dropped Ocean Level, pages 181-183
R.A. Daly observed that in a great many places all around the world there is a uniform emergence of the shore line of 18 to 20 feet. In the southwest Pacific, on the islands belonging to the Samoan group but spread over two hundred miles, the same emergence is evident. Nearly halfway around the world, at St. Helena in the South Atlantic, the lava is punctuated by dry sea caves, the floors of which are covered with water-worn pebbles, now dusty because untouched by the surf. The emergence there is also 20 feet. At the Cape of Good Hope caves and beaches also prove recent and sensibly uniform emergence to the extent of about 20 feet. Marine terraces, indicating similar emergence, are found along the Atlantic coast from New York to the Gulf of Mexico; for at least 1,000 miles along the coast of eastern Australia; along the coasts of Brazil, southwest Africa, and many islands in the Pacific, Atlantic, and Indian Oceans. The emergence is recent as well as of the same order of magnitude. Judging from the condition of beaches, terraces, and caves, the emergence seems to have been simultaneous on every shore. In Daly's opinion the cause lies in the sinking of the level of all seas on the globe. Alternatively, Daly thinks it could have resulted from a deepening of the oceans or from an increase in their areas. Of special interest is the time of the change. Daly estimated the sudden drop of oceanic level to have occurred some 3,000 to 4,000 years ago. 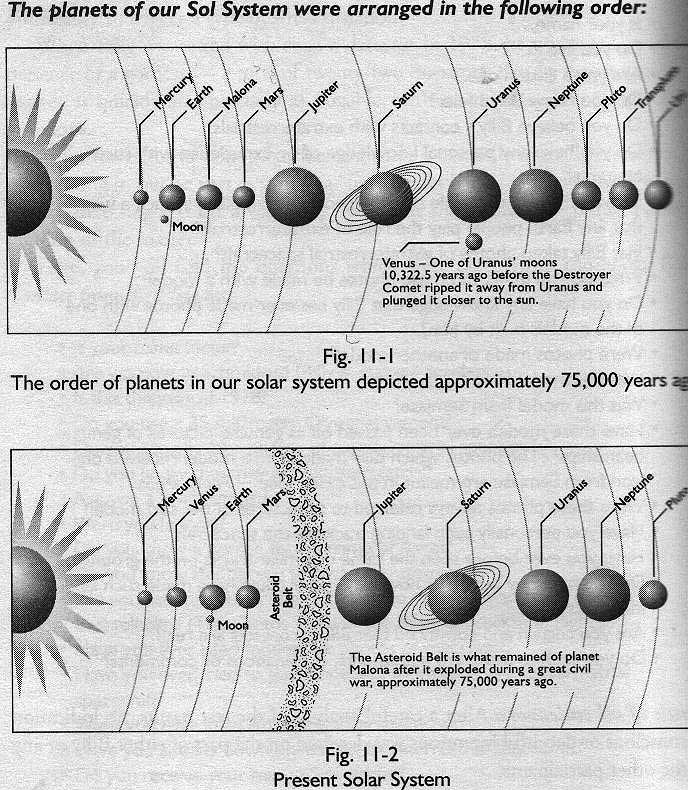 Scientists Challenge Conventional Sea Level Theory
December 3, 1999
http://www.jrmooneyham.com/lostcv4ref.html
Australian scientists say they have discovered evidence of rapid change in world sea levels and of a dramatic fall in geologically recent times - directly challenging current conventional wisdom. Dr Robert Baker of the University of New England, in the New South Wales country town of Armidale, has tapped the secrets of worm coatings on once-submerged rocks to shake established theory that sea levels are presently as high as they have ever been. Baker argues that sea levels have not been steady since the last ice age, as is commonly believed. Baker and his colleagues at New England University say the sea level may have fallen quickly 3,500 years ago, by as much as a meter in just 10-50 years.

Also the ET- Zetas have great respect for the works of Immanuel Velikovsky, whose work was negated by those who considered the concept of great cataclysms happening during their lifetimes to be too threatening to contemplate. Velikovsky, thus, was vilified.

ZetaTalk said on Velikovsky 8/15/1995: Immanuel Velikovsky was a genius on par with Einstein, which is a fact seldom mentioned by his detractors. Both he and Einstein were Star Children, and indeed were friends who engaged in the type of friendly argument only two geniuses could engage in. Velikovsky's Mission was to set mankind to thinking about the periodic cataclysms that have so dramatically left their Mark on the Earth and human history. Like Einstein, he was berated for presenting what most of mankind does not want to think about - bad news. Mountains obviously thrown skyward under extreme pressure, the Ruins of great civilizations with no reason for demise, flash frozen carcasses of healthy Mastodons with no evident cause of death - all this is put over the wall and not dealt with. Research into uncharted territory seldom results in solid conclusions all around. Theories based on theories don't have a solid base. That any of the theories prove out, under these circumstances, is a wonder. Thus, some of Velikovsky's theories as to the cause of the Earth's cosmic near-collisions are unfounded. Where the planet Venus was sent into an irregular orbit after one recent pole shift, the upheavals on Earth were caused only by the passage of the 12th Planet (the destroyer- rø) - the major ingredient in the brew. Unlike Einstein's theories of relativity, Velikovsky's theories cannot be effectively proved until the Red Star, the 12th Planet, returns to savage this Solar System again. Unfortunately for those unwilling to listen to Velikovsky or contemplate the evidence he so poetically presents, they will be learning the truth of his theories - too late!

Potsdam Institute in Germany concluded that the tilt of the Earth actually changed approximately 3,600 years ago, triggering more desertification in the Sahara.

Sahara Turned to Desert in Abrupt Cclimate Change
July 15, 1999
http://www.climateark.org/articles/1999/sahturnd.htm
The rains stopped coming, the temperature rose and the great grasslands of North Africa turned to desert a few thousand years ago - changes that may have helped spur development of civilization in the Nile Valley. The change to today's arid climate was not gradual - 4,000 to 3,600 years ago, according to a paper published today by the journal Geophysical Research Letters. A team of researchers headed by Martin Claussen of Germany's Potsdam Institute for Climate Impact Research analyzed computer models of climate over the past several thousand years. They concluded that the change to today's desert climate in the Sahara was triggered by changes in the Earth's orbit and the tilt of Earth's axis.

The same bizarre weather we are experiencing today was experienced some 3,600 years ago, according to documentation from the reign of Emperor Oin, circa 1,600 BC. Frost in July, torrential rainfall, temperature swings, crop shortages, and a disturbed rotation of the Earth. These are all things that have been predicted by the Zetas for the current time or for the week of the coming pole shift itself.

In the twenty-ninth year of King Chieh, the Sun was dimmed... King Chieh lacked virtue... the Sun was distressed... during the last years of Chieh ice formed in mornings and frosts in the sixth month. Heavy rainfall toppled temples and buildings... Heaven gave severe orders. The Sun and Moon were untimely. Hot and cold weather arrived in disorder. The five cereal crops withered and died.

Per the Zetas, the Mediterranean Sea was a swamp in the past, not flooded with sea water, a fact which allowed early man to migrate from Africa to Europe. As the Mediterranean ripped during pole shifts, it sank, and the evidence of sloshing sea water stands as evidence of the timing of one of those slosh points - two pole shifts back or approximately 7,200 years ago.

A New Wave Of Evidence
November 18, 1999
http://www.washingtonpost.com/wp-srv/WPcap/1999-11/18/090r-111899-idx.html
Scientists have discovered an ancient coastline 550 feet below the surface of the Black Sea, providing dramatic new evidence of a sudden, catastrophic flood around 7,500 years ago. A team of deep-sea explorers this summer captured the first sonar images of a gentle berm and a sandbar submerged undisturbed for thousands of years on the sea floor. Now, using radiocarbon dating techniques, analysts have shown that the remains of freshwater mollusks subsequently dredged from the ancient beach date back 7,500 years and saltwater species begin showing up 6,900 years ago. Explorer Robert D. Ballard, who led the team that collected the shells, said the findings indicate a flood occurred sometime during the 600-year gap.

And in 1628 BC, as best as man can estimate, a gigantic explosion on the island of Santorini occurred - a VEI 6. This was the volcanic explosion that caused Moses to wander in the Valley of the Shadow of Death during the Jewish Exodus at that time. The volcanic gloom that occurred approximately 3,600 years ago affected tree growth in northern Europe.

Ancient Trees May Explain Story of Atlantis
September 14, 2000
http://delasalle.digitalbrain.com/delasalle/Communities/Science/discussion/Quirkies/World
The Greek island of Santorini blew up in the mid-1600s B.C. While the team led by Hakan Grudd of the Climate Impacts Research Center in Kiruna, Sweden, dated the Santorini blast to 1628, other scholars use different dates, though all are within a few years. The Swedish team said their tree ring dating had a margin of error of plus or minus 65 years. Other scientists studying tree rings have found periods of frost damage and slow growth in the mid-1600s B.C. affecting Irish, English, and German oaks, pine trees in California and trees in Turkey.

on the origin of the destroyer-comet and the past' deluges 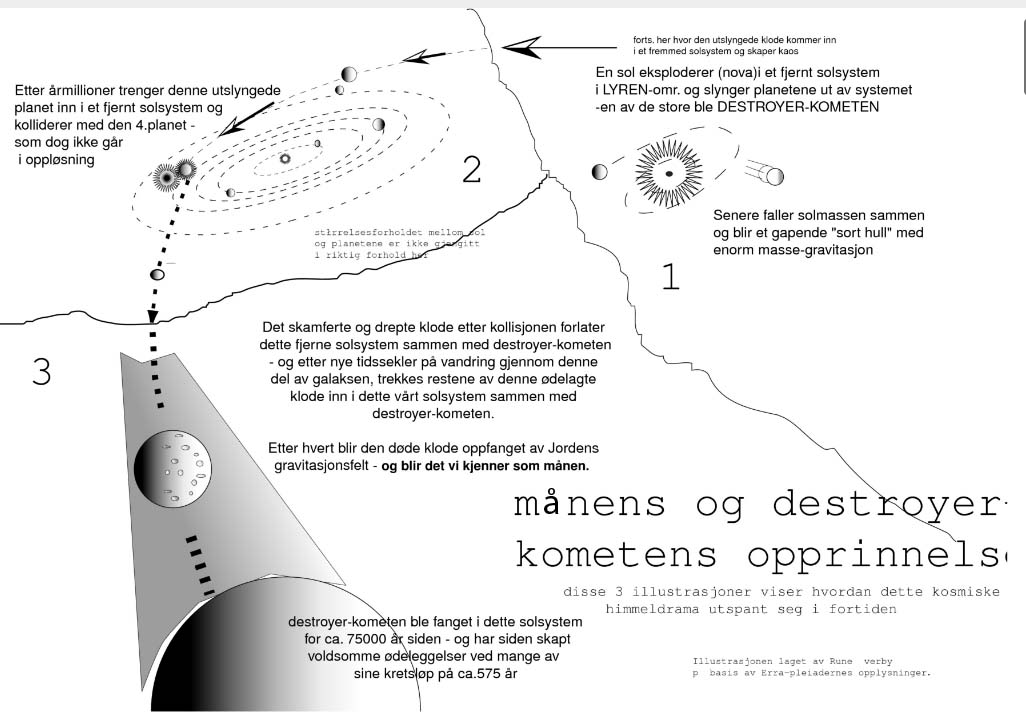 ORIGIN OF THE DESTROYER -COMET AND OUR MOON

1. A distant sun explodes in a far sunsystem in this galaxy. One of the rel.big ones in that system is thrown out of that system.

2. After millions of years, this expelled planet goes into another solar system, where it collides with the fourth planet in that system, but this does not break completely

3. but the broken planet leaves this distant sun-system along with the destruction comet, which has great attraction-force, and after many centuries of migration through this part of the galaxy, the remains of this broken planet are drawn into this OUR solar system together with the destroyer comet

gradually, this dead planet is captured by the earth's gravitational field and becomes what we know as the moon.

The destruction comet was captured in this solar system about 75,000 years ago and has since caused massive devastations during many of its 575 year cycle