THE COSMIC RACES -  SYMPATHY AND  POLARITY 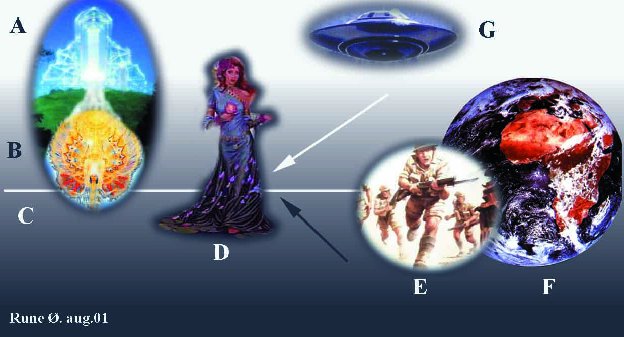 as the LIVING UNIVERSE (ALL, God, Creation, etc) only perceives through contrasts - there must be both light and darkness - good and evil. But the real EVIL arise when the "animal"-instinct is mixed with a kind of developed intelligence. Here on the theme: polarity of the intelligent races of 3. og 4.density.     Summary from page http://home.iae.nl/users/lightnet/creator/overview2.htm 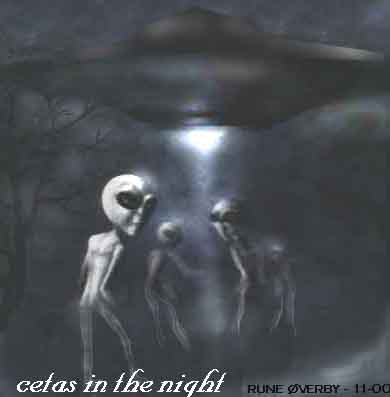 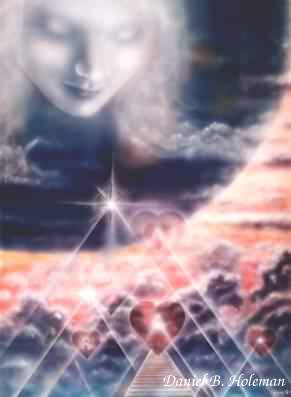 From Alien Observers'
THE SECRETS OF THE MOJAVE part 1:

One very interesting account, which seems to indicate that hi-tech human societies on and within the earth did in fact colonize other planetary bodies thousands of years ago, appeared in SEARCH magazine. The article, titled "BRACE YOURSELVES", was written by an ex-NASA employee who identified himself only as 'The Doc'.

His account appeared in the Winter, 1988-89 issue of that magazine. This ex-NASA employee related at the beginning of the article two very remarkable things that he'd heard while working at NASA. One of them included the discovery that the sun's surface may not be a region of continuous thermonuclear activity as has commonly been believed. Instead, scientists had found that it appeared to be in essence a tremendous electromagnetic dynamo or sphere which in turn generates the electromagnetic fields of the planets. In other words it seemed to be more of a gigantic electrical 'light' or 'sphere' than a gigantic thermonuclear reactor, although nuclear reactions might play a part, but not nearly to the extent that many believe.

Some have alleged that the 'heat' experienced from the solar orb on a planets' surfaces is not so much determined by their proximity to the sun, but more by the amount and type of atmosphere with which the solar radiations and rays interact to produce friction and heat. In simple terms, the sun is not 'hot' in the sense that most believe, but the solar flares and explosions taking place on the surface of the sun are more consistent with tremendous electrical 'arcs' than with nuclear explosions. The other 'revelation' he received from other NASA employees was that the U.S. Navy has for several year been making regular reconnaissance-observation trips to monitor alien 'bubble-cities' on the ocean floor.

Some years afterwards, while practicing homeopathic medicine in Phoenix, Arizona in 1984, 'The Doc' met a young man who had come into his office to pick up some 'UFO photos' he had loaned to a different doctor on a previous visit. The ex- NASA employee struck up a conversation with the young man. Following is an excerpt from the conversation which ensued between the young man and 'The Doc' during that visit. The young man said, after talking to 'The Doc' about the photos:

"So, do you know anything about UFO's?"

"Only what I've read since the 1950's and hear tell by others who have had encounters. How about yourself?"

"Well, there are such craft now in our atmosphere with bases underground and underwater. One group is very advanced and can take you anywhere in the universe."

"Should Einstein be upset to hear that?" I thought about it for awhile.

"There is a whole science concerning traveling above the speed of light. These people are so advanced that most of the world is not ready to understand or appreciate their values and their scientific attainment."

"Well, no matter how advanced their technology, spiritually they have the same plight as we. We are all spiritual brothers and sisters and must solve the mystery of returning to our Source."

He looked at me penetratingly and continued.

"When I was eight years old and playing with a friend out in a field, a craft came down, landed not far from us and a man and woman came out and walked up to us, smiling and calling us by name. They seemed to know all about me, what school I was going to, what subjects I liked best, and they told me that they would every so many years return and visit with me. They also said that they wanted me to do well in school."

"Did they return?" I asked, smiling, half in disbelief.

"Yes, surprisingly, they did. About five years later. I was about thirteen or fourteen. They told me that I was one of them and I was put on this planet to help them someday in the future."

"Incredible!" I played along with this.

"You haven't heard the best part. I was nineteen and was driving one night up through a wooded area in Connecticut, and suddenly this saucer swooped down over my car. I almost drove off the highway I was so shocked. It paced me, staying just above the car, and this voice came over my car radio speakers, but my radio wasn't even on! This voice knew my name and asked a number of times, 'Dave (pseudonym), when will you return home? You have been gone so long.'

"I was really shaken up by this, and then they somehow lifted my car off the highway and took me over a hill and brought me back down on the same highway, without my tires even squealing. They finally said that they would return again someday.

"I stopped at the first public phone and phoned my parents in Vermont. When my mother answered I was so shaken and anxious over the possibility of my parents having not told me the truth, I didn't bother to tell her what had happened on the highway. 'Mom, who am I?'

"'Mother, who am I really? How did I get into this world?'

"'Son, you got into this world just like other boys. I delivered you in a hospital.'

"'Mom, I don't believe it. Over and over I have been visited by people in starships who, somehow, know me. They say I am supposed to help them someday. Their ship just came down over my car, they called me by name and toyed with me about when I would come home to them someday. And then they picked up my car off the highway and gave me quite a shocker of a ride. I'm different, aren't I. I want to hear the truth.'

"There was a long silence at the other end of the phone."

"'All right. We were going to tell you someday as you have continued to mention these kind of things. Your father and I found you and your sister one evening as we were walking out behind the cabin like we did every evening after dinner. We found you and your sister wrapped in a blanket nestled between some boulders up on the hillside. We couldn't believe what we saw. You both were dressed in shiny one-piece suits. You were about a year old. We asked around and could not find anyone that might know your parents. We figured that you had been abandoned but we both had the strongest impulse to take care of you both until someone came into town and asked about you.'"

I was now shaking my head. "And have you continued to be visited by your friends?"

"Where are they from?" He had me going now.

"Are you familiar with the Seven Sisters constellation?"

"It's also called the Pleiades constellation."

"They won't interfere for the most part with the social problems and destiny of the Earth. It's a policy of theirs."

I was standing up now looking sad, "I'm sorry to hear that..."

"The Doc" then gave him a checkup, since the young man had originally come in for back problems. After he had informed the doctor that his back no longer bothered him, he told "The Doc" that he had to rush to catch a flight to Switzerland, and left the clinic.

"As I was turning into my office," the Doc continued, "one of the chiropractic physicians called as he was walking towards me down the hall carrying an X-ray.

"'Look at this X-ray. This guy is really different.'

"I looked at it. 'Two extra cervical vertebrae.'

"'Also abnormally low vital signs (blood pressure, pulse). Not sure about the placement of the organs either.'

"I looked at the helpless expression on my associate's face. 'Friend of yours?'

"'The guy that just left to catch a flight to Switzerland.'

"I found myself looking down an empty hallway, far off into the distance..."

from Alien Observers'
THE SECRETS OF THE MOJAVE part1