What about the Philadelphia Experiment as related to aliens? 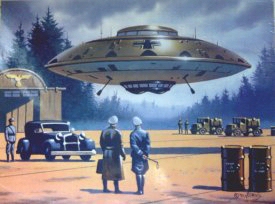 The Philadelphia Experiment was not an alien operation, as such, but what was the set-up was the date, August 12, 1943, because it had to be locked to the Phoenix project on August 12, 1983. The date was set by alien influence in order to cause a 40-year hole in hyperspace through which large numbers of alien craft could enter this dimension. It worked, but it didn't last long enough to give the aliens the maximum benefit of the scenario. The order for the date came from a man in the White House who was directing certain aspects of the project.

This man was one of the K-group and headed what was called the Psi-corp. It was an alien intervention. This was scheduled to be a main invasion from a different universe.

How about other types of aliens that were involved?

What about the alien ship, again, that was trapped underground at Montauk?

I was part of the group that dismantled it. What is involved is that you have to find out how everything goes together. You have to read their manuals... there were seven occupants of that ship; four of them would not talk to us. Eventually, three of them did, and we learned their language and deciphered their manuals about the construction and maintenance of the ship...

No. They were about 6 foot 5 inches tall. They were essentially human in appearance. They had dark leathery skin. They had no hair. Where they came from we were not sure. We don't even know why they were there, except perhaps to observe the test on August 12, 1943. When the ship appeared in 1983 underground, we were initially concerned as to whether this ship represented some sort of "point man" for an invasion of some kind.

Was there any weaponry aboard that craft?

Not that I remember. The ship had a lot of strange devices on it. We took a lot of stuff apart. We took off part of the control panels, and communications equipment. We decided not to touch the main power plant because we thought it might blow up if we fooled with it. We left the food processing units intact. The ships drive systems were removed. A lot of the ship was stripped down right to the shell. It was left that way.

Why would they suspect an invasion?

Idon't know, except that there have been so many groups over the years trying to invade this planet. One wonders why they want to bother with this mud ball and its backward technology.

That is one good possibility. Another one, and I get this from sources I can't reveal at this moment, is that they are seeking certain rare earth elements they apparently can't find elsewhere.

Robert Lazar mentioned a book that contained the history of earth and that it said that humans were referred to as ..containers for souls" and that souls could be traded in something like a barter system.

The aliens are doing it all the time.

They're trading in souls?

Yes. They were shuffling us around like we were cattle to them.

Property. What do you think of that concept as applied to humans?

Well, it is mentioned that several races consider humans in some ways similar to that. Whether it is the bodies or the souls that are considered property, I don't know. It appears that they are concerned more with the bodies, the genetics, and the capabilities of the human mind. The capabilities of the human mind are virtually unlimited. That fascinates some species.

Those aliens that were on that ship. What became of them?

Out of the seven, four did not talk and three did talk to us. One of the group that did not talk to us was evidently the captain of the ship. He eventually killed the three that did talk to us. The four remaining aliens were put into "deep freeze" by the people who were running the underground at Montauk. I have no idea what they did with the other three bodies.

What happened to the craft?

it's still there, as far as I know. It was a gold colored saucer about sixty feet in diameter. It had a bulge on both the top and bottom.

LATER ON THE THEME INTERSTELLAR COMMUNICATION FASTER THAN RADIOWAVES (Tesla-technique)

....."This is all very interesting. With a sixth order energy we can develop a communication system with a propagation rate C6, that's C to the 6th power. They now have one C8, C to the 8th power.

SS: C being the speed of light?

AB: C is the speed of light, to the 8th power. That's so fast they can literally communicate clear across our galaxy with nothing more than a phase shifter. There is essentially no delay. With the C' system there was a delay so they went to the 8th. 50,000 light-years across our galaxy and they can do it in a fraction of a second.

So Einstein was wrong in one sense. Nothing can go faster than the speed of light? It can. It's long since been done. It was probably done long since he made the statement. Einstein did relent of some of his statements in earlier years before he died but it was not publicly stated that he had.

SS: Speaking of aliens and technology, do you know which aliens Tesla talked to? to?

AB: The Pleiadians basically that was one of his principle communication groups. Also a group called the K group. K stands for Kondrashkin. That's the best literal translation of English. They were sort of light green skinned humanoid like with no hair. If you put them up in the right garb and bleached their skin and put an old fashioned wig on them they'd pass very readily for an Englishman. Not that I'm trying to cast any kind of aspersions on English people but they most readily pass for English. And the dye or powder or whatever they put on their skin didn't last more than two weeks. Then there were 2 others and I don't know who they were. When you start calling out into space you don't know who is going to answer. And they did. Tesla knew 11 or 12 languages and I presume these people communicated back in English but I don't know that for certain. I wasn't there I only heard the stories from 2 other researchers who had worked with him before he died. I'm told of the equipment and the fact that he did communicate on an almost daily basis with somebody from the outside.

This link was originally found on http://pinsight.com/~batman/swfqw/swfqw.htm.

However, after a couple of weeks it was no longer avaliable ...
"404 Not Found... The requested URL /~batman/swfqw/swfqw.htm was not found on this server".

Good luck we saved it before.