MY FRIEND FROM BEYOND EARTH

link to some on the nordiclooking  LYA and Prof Hernandez below | mp3 with Frank Stranges on intr.stuff

link to much stuff from Dr. Frank E. Stranges’ Articles on Space, Science and Spirituality | onlinelecture-video 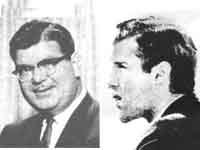 picture from 1960 of Frank Stranges left and the contactperson VAL-THOR to the right. Any similarity of the picture to persons living or dead is purely coincidental.

Here from Chapter 2 - remark that the Dr Frank E Stranges was a true Christian and the contactman therefore seemed to use a religious way of expression.

One cold morning in December, 1959, through strange and unusual circumstances, I was invited to speak with a man from another world. This took place during an evangelist crusade, which I had the pleasure of conducting in our nation's capitol, Washington, D.C.

The invitation was given me by a person who, for obvious reasons, cannot be named in this writing. However, suffice it so say that person is a born-again Christian with a sound mind and a good position at the Pentagon Building.

I had heard rumors in various states that such a man existed and was secretly being entertained by a few officials in high places. Howbeit, through my ability to follow orders, I was successful in passing the security guards in order to gain admittance into the presence of a man from a nearby planet.

Since that time, I have pondered this event in my own mind, over and over again. I thought how privileged I was to have had this interview.

The great morning came. The proper arrangements had been made. I was in a car, on my way to meet and speak with a visitor from the other end of our telescope. A man who gave me a feeling of perhaps being among those who, before me, have carried on similar conversations with men from outer space. As the car drew closer I began to formulate questions in my mind that I would place directly to him. I was then ushered into the vast network of the world-famous Pentagon Building in Washington, D.C. I cannot posibly express just how I felt when I followed the outlined plan for me to pass directly through the security guards. The next thing I knew, I was standing in front of a closed door. My host instructed me to walk in and commence with my interview, then left me standing alone.

Being a minister of the Gospel of the Lord Jesus Christ, as well as a student of the Bible for many years, coupled with the fact that I had been a Special Investigator, I felt as tbough my senses were functioning properly and that I knew exactly what I was about to do. I have always been keenly aware of fakes and frauds, even in the ministry; of this, I was constantly on my guard.

As I opened the door, to my left were three desks equipped with typewriters and other general office equipment. At one desk, which was back-to-back with another desk, sat Army "brass", busily engaged in what appeared to be paper work. The other man, a sergeant, was typing away. None of these three men lifted so much as their eyes when I entered the room. It was as though I did not exist as far as they were concerned.

I then saw one lone man standing with his back to me, looking out a window. As I approached him he turned slowly and looked at me. IT WAS AS THOUGH HE LOOKED STRAIGHT THROUGH ME.

With a warm smile, and outstretched hand, he slowly started toward. I felt strange all over. He then raised his hand toward me in a gesture of friendliness.

HIS APPEARANCE: As I gripped his hand, I was somewhat surprised to feel the soft texture of his hand like that of a baby. However, his grip was that of a man. A firm grip that silently testified to strength and power.

His eyes were brown and his hair wavey brown, also. His complexion was not out of the ordinary. It appeared to be tan.

He was to all appearance like an Earth man …-but HE HAD NO FINGERPRINTS. Now, as a former Special Investigator I have studied some concerning the proper value and classification of fingerprints in crime detection, as well as other reasons of identication.

HIS VOICE: The very first words that fell from his lips were, "HELLO, FRANK". His voice was very strong and mellow. It was filled with character and purpose. I then looked around the room again to see whether the other men would say or do anything. They kept on about their business, as though I was not even there. This is very difficult to understand, but there must be an answer somewhere.

HIS CLOTHING: During our conversation, which lasted about one-half hour, I asked him many questions. I took notice that he was wearing the same type of clothing as I. When I asked if he possessed any clothing other than that which he was presently wearing, he stated that he had changed clothes in order to give the officials a chance to run exhaustive tests on his garment . . . which they did. He then walked over to the closet, which was directly behind the sergeant, opened it and produced a one-piece garment that glittered as he brought it toward the sunlight streaming through the window; just as a passing thought that flashed through my mind, it looked like liquid sunlight.

I asked him of the material from which it was made. He answered, "IT IS MADE OF A MATERIAL NOT OF THIS EARTH". I further questioned him as to the tests that the garment had undergone. In sum, he stated the following:

1. They gave it the fire test. Temperatures above that of the melting point of steel did not even warm the suit.

2. They gave it the acid test. The acid rolled off it like water from the back of a duck.

3. They also tried to pierce it with a diamond-point drill. As a result the drill overheated, and the diamond point snapped, when it came in contact with the garment.

The general appearance of the suit was all one piece even down to the boots. It contained no buttons, zippers or snaps. I asked him how it held together. He demonstrated by holding the front together, passing his hand as though to smooth it out, and I could not even locate the opening. It was held together by an invisible force.

HIS PURPOSE IN COMING: He stated that he came in order to help mankind return to the Lord. He spoke in positive terms . . . always with a smile on his face. He said God was displeased with the fact that mankind is farther away from Him than ever before, but that there is still a good chance for mankind to find salvation if he looks for it in the right place. He also stated that he had been here for three (3) years and is due to depart on March 16, 1960. Claiming that he would not use force to speak with men in authority in America, but would be happy to consult with them at their invitation, he further stated that thus far only a few men in Washington knew of his existence in the Pentagon and few leaders have availed themselves of his help and advice during the past three years. The time of his departure was getting near at hand as yet he felt there was still so much to do. But his purpose would not be fulfilled by forced.

HE HAD NO FINGERPRINTS: After I questioned him on having no fingerprints, he replied to me in this manner: "FINGERPRINTS ARE A SIGN OF FALLEN MAN. FINGERPRINTS MARK A MAN ALL THROUGH HIS LIFE." He also said, "FRANK, YOU OUGHT TO KNOW, BEING A FORMER INVESTIGATOR, THAT THE FIRST THING THE AUTHORITIES LOOK FOR AT THE SCENE OF A CRIME IS FINGERPRINTS."

HIS HOME PLANET: When I asked him where he was from, he replied, "I AM FROM THE PLANET THAT IS CALLED VENUS. (remark that the contact persons in those days didn't explain multi-dimensionality - that the "physical" lifeplane or life-carrying-frequency - of Venus is what we here call the astral level. Later they have explained that they evaluated the earth people not yet ready or ripe for this knowledge then.)

" I asked him how many visitors we had here on Earth from Venus. He said, "THERE ARE PRESENTLY SEVENTY-SEVEN OF US WALKING AMONG Y()U IN THE UNITED STATES. WE ARE CONSTANTLY COMING AND GOING".

Conclusion: I have attempted to bring you a moment by moment, description of this amazing account. As I turned to leave the room, he said simply, "PLEASE KEEP YOUR FAITH AND LEAVE THE SAME WAY THAT YOU CAME IN. CONTINUE TO SEEK FIRST THE KINGDOM OF GOD AND HIS RIGHTEOUSNESS AND ALL OTHER THINGS WILL, IN TIME, BE ADDED UNTO YOU AND YOURS. GOODBY FOR NOW, AND GOD BLESS YOU AND KEEP YOU ALWAYS."

As I left his presence, I still maintained a warmth in my heart. I began to wonder who would believe me if I ever repeated this strange encounter with a man from another planet. I first considered not repeating this strange story. But the more I thought about it, and the more I prayed about it, the more I felt that it would bring a great blessing to those who would hear and read it. I also thought of the possibility of being involved with the Government, but I decided to brush away all suppositions and fears and tell the whole truth, because Jesus said, "YE SHALL KNOW THE TRUTH, AND THE TRUTH SHALL MAKE YOU FREE".

This inter-planetary traveler possessed a wealth of knowledge, not only about science and about God, but also about me. He commended me on my book, "FLYING SAUCERAMA". He stated that it could not have been written except with Heavenly guidance. He said that soon it would be read throughout the whole wide world.

Therefore, reader, you have the whole story. Read it over carefully and see what hadden message you may find herein. May God bless and guide you into all TRUTHS.

link to much stuff from Dr. Frank E. Stranges’ Articles on Space, Science and Spirituality

mp3 with Frank Stranges on intr.stuff